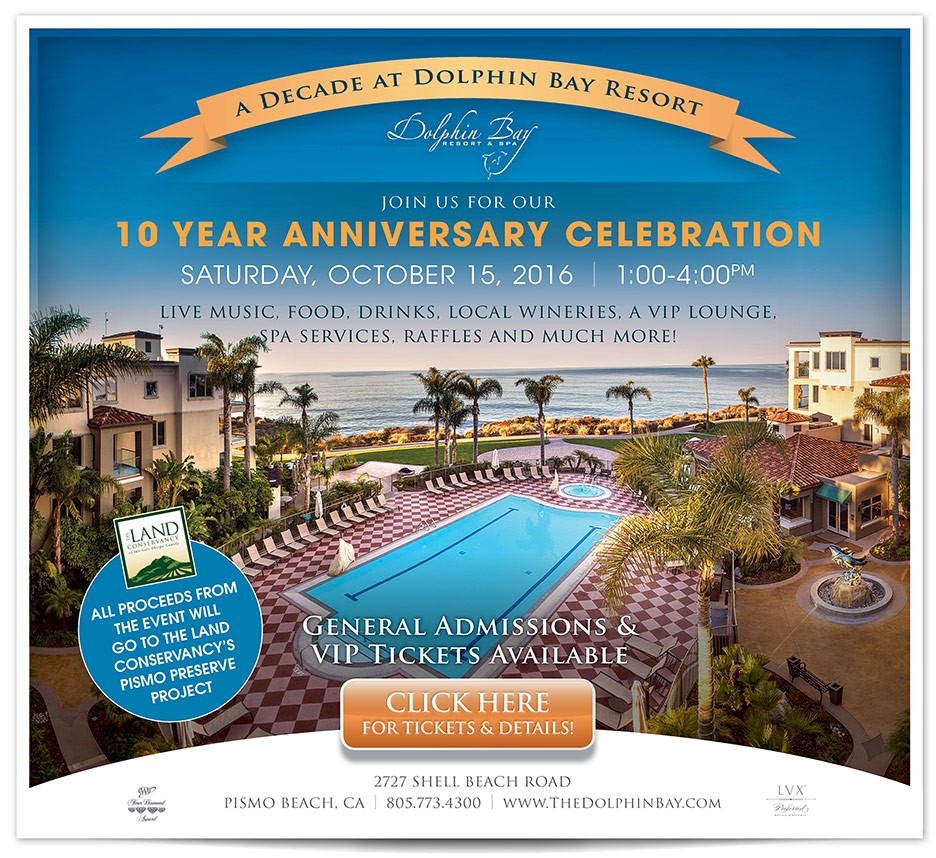 Dolphin Bay Resort & Spa, one of California’s finest resorts, is celebrating its 10th Anniversary in 2016. Built by visionary developers Richard Loughead and Spalding Wathen, Jr. on a 40-foot-high bluff overlooking the Pacific Ocean, Dolphin Bay Resort & Spa opened in 2006 as one of Pismo Beach's premier luxury resorts. The Dolphin Bay experience comprises the luxury hotel, its signature restaurant, Lido, and the newly remodeled Spa at Dolphin Bay, surrounded by expansive lawns and the breath-taking beauty of California’s Central Coast.

With sixty spacious suites offering never-ending views, the resort enters its second decade stronger than ever. Additionally, their new website provides a detailed introduction to the resort,  their new pool and pool deck, an expanded and remodeled spa, new furniture and fixtures, and refreshed exteriors.

After 15 years of planning, permitting and construction, Dolphin Bay Resort & Spa opened its doors in March 2006 and since then, the resort and its staff have been strong and committed members of the local community and the hospitality trade, serving hundreds of thousands of satisfied guests from all over the world.

Over the last decade, Dolphin Bay Resort & Spa and its employees have been recognized by guests and peers alike:

The staff and management of Dolphin Bay Resort & Spa will be celebrating their ten-year milestone and unveiling their new logos and brand scheme at a party on October 15, 2016 with food, wine and live entertainment.  All proceeds from the event will go to The Land Conservancy's Pismo Preserve Project.  The Pismo Preserve is 880 acres of preserved open space overlooking Pismo Beach. This exquisite property will feature world class hiking, biking and equestrian trails and will provide outdoor recreation opportunities for the community and increase eco-tourism in Pismo Beach.